The dash is an interesting mark of punctuation. Used as early as the 1700s, a dash was generally used to mark a break, similar to the modern day period. There are numerous definitions for the dash, but for grammatical purposes, the Oxford English Dictionary uses the following definition: "A horizontal stroke of varying length used in writing or printing to mark a
pause or break in a sentence, a parenthetic clause, an omission of words or letters or of the intermediate terms of a series, to separate distinct portions of matter, or for other purposes; sometimes implying the use of strong language;
hence as a mild substitute for devil." The dash then is used quite similarly in a grammatical construct to the way it would have been used in its earliest stages. However, it must also be taken into account that Emily was a poet; in poetry, every word, every punctuation, counts to serve some kind of purpose. Therefore, it can be assumed that the dash was more than just a brief pause in her works. The Oxford English Dictionary also lists "A violent blow, stroke, impact, or collision, such as smashes or might smash" as a definition for dash. Is it possible then that she used dashes in her works to strike a blow to her words or audience? There are also two different 'types' of dashes thanks to modern day word processing systems. The 'em' dash is roughly the size of a capital M and is used in most situations that may require a dash, such as a pause or omission of letters. The second type of dash is the 'en' dash. The 'en' dash is about the size of a capital N and is used to separate chronological times or dates. In Emily's era, there was no distinction between the two, especially in handwriting, so it would be hard to differentiate between the two distinct ways to use the dash. In Emily's works, there are varying sizes of dashes, from long and bold dashes, to tiny, short, barely there dashes. Perhaps the way she wrote the dashes is of some significance as to the meaning behind them. Dashes are also used to express a sudden change of thought in modern times when used correctly and are more common in informal writing than formal writing. The idea behind this is that a comma or semicolon would work in the exact same context as a dash in these situations. There were commas during Emily's time, as can be seen occasionally in her works, but the use of a semicolon was hardly ever noticed in literature. Due to this, a dash would have been appropriate to use in order to shift thought whether in informal or formal writing.
The dash in Emily's works appears to be used sporadically without any real thought behind its location or need. However, seeing as her main works are poetry, there is a definite purpose to her dashes. Most commonly, a dash in her work will appear at the end of a line of poetry, whether or not there is any sort of punctuation needed. Emily may have done this in order to draw out the reader's attention and force them to focus one line at a time because a dash can be used to express a change in thought. Although her thoughts did not necessarily change from line to line, the dash would have caught the attention of a reader during her own time and a reader during the current era. The dash draws eyes towards it, almost catching the reader off guard, and causes the reader to pay more attention. The dash almost seems out of place, and humans are naturally drawn to things that appear to be out of synch with the rest. If this was the intent of Emily, it is a very clever idea and trick to use to captivate readers. Using a comma or a period was more common and is less likely to capture a reader's attention to a particular spot on a page or to make them take pause and allow the words to sink in. A dash would create the right amount of curiosity to have an audience consider and ponder about the reason behind the dash and how it connects back to the words in the work.
Images are owned by Harvard University. 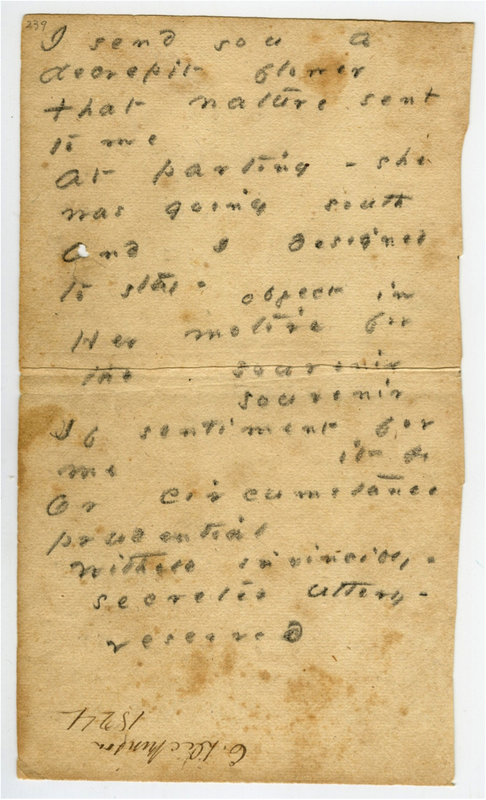 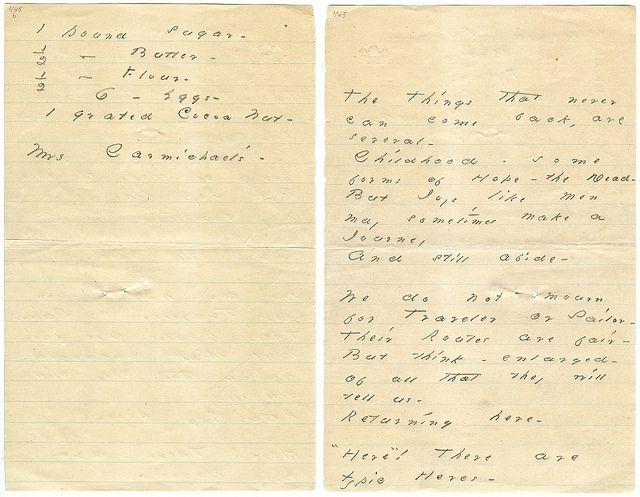